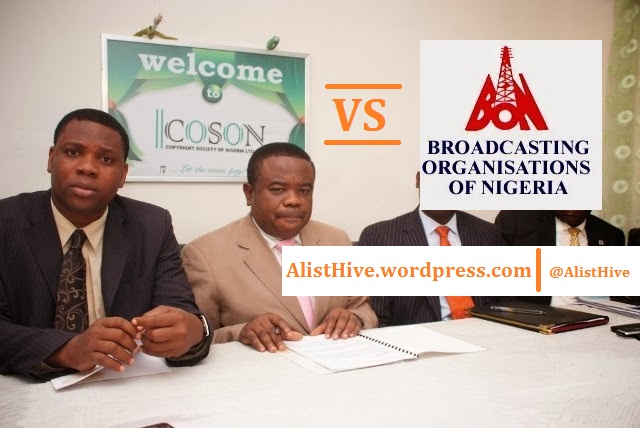 Remember some months ago, we here at Alist Hive reported to you about the battle of airplay rights between COSON, IBAN, BON and so on… (see the story here)

I am not going to write much on this, because yes! it is quite interesting but its too long and personal opinion – its just not worth it! This big organisations need to sort this issues out and stop lying that they are working in the interest of Artist and Musicians – when they are working for their own personal & organisational interest, and egos.

Read the full story below by NotJustOK:

There’s a fierce battle going on right now between Copyright Society of Nigeria (COSON), and the Broadcasters Organization of Nigeria (BON) as well as the Independent Broadcasting Association of Nigeria (IBAN). COSON has dragged a few radio stations to court in a bid to have them pay very large sums as royalties to artists for airplay. For this reason, BON and IBAN have reacted by placing a ban on the playing of songs by artists who are members of COSON.

In a statement jointly signed by Sonny Adun and Guy Murray Bruce, IBAN Chairman and Secretary respectively, the two bodies said they were constrained to take this step principally as “a result of COSON’s attitude of antagonism and harassment under the leadership of Tony Okoroji (COSON Chairman)”.

“The Independent Broadcasting Association of Nigeria (IBAN), in alignment with Broadcasters Organization of Nigeria (BON) hereby informs the General public that the music of the following Artistes is hereby suspended from airing on our stations with immediate effect:

“No person or organisation, particularly a collection society such as COSON has a monopoly of authority over any other. IBAN and BON have the utmost respect for Nigerian artistes in their individual and collective capacities and have indeed contributed more than any known institution to the promotion of Nigerian music and the development of the entertainment industry as a whole,” the statement reads.

As a response, COSON Issued the following Press Release this morning:

Less than 48 hours after the Independent Broadcasters Association (IBAN) and Broadcasting Organization of Nigeria (BON) issued a statement banning the broadcast of the music of nearly all of Nigeria’s topmost musicians on the radio and TV stations run by affiliate stations, a group of star musicians and top players in the music industry have fired back.

The group comprising the likes of 2 Face Idibia, 9ice, MI, Azeezat, Ill Bliss, WunmiObe, Dizzy K. Falola and representatives of Burna Boy, Sound Sultan, DammyKrane, Sir Victor Uwaifo, Ice Prince, Sunny Neji, etc met at Whitehouse Hotel, GRA, Ikeja on  Wednesday, December 4. One after the other, the music industry stars expressed outrage by the decision of BON and IBAN and their attempt to manipulate the music industry so that they can run away from their responsibility of paying copyright royalties for music broadcast by them.

They rose from the meeting with the following resolutions:

1.   That all authors, composers, songwriters, artistes, performers, publishers, record label executives, owners of sound recordings, publicists, managers, etc should ignore the IBAN email and no right owner should send any message to the email provided by IBAN.

2.   That no self-respecting right owner of the Nigerian music industry should sell his/her birth right by sending an email to BON or IBAN to request that they play his/her music.

3.   That the music industry will consider the stations that  comply with their copyright obligations and advice all right owners to move their works to the stations and encourage their fans and followers to support such stations.

4.   That all IBAN/BON stations not licensed for the use of music should take note that with immediate effect they should cease to broadcast music whether local or foreign on their stations – These stations must also suspend the use of music whether wholly or in part by way of sampling, interpolation, remixing or outright jacking pending the resolution of this matter.

5.   That this movement is a historic fight for the recognition of the fundamental human rights of all creative people in the Federal Republic of Nigeria and no creative person should sell out or allow himself/herself to be made a saboteur in this historic battle.

PMAN has also chipped in…

The Performing Musicians Association of Nigeria is appalled by the recent development spearheaded by the Broadcasting Organisation of Nigeria (BON) and Independent Broadcasters’ Association of Nigeria (IBAN) via an official press release yesterday, calling for the  immediate airplay ban on all media platforms on content from Nigerian artistes, the association which was created with the sole mission to PROTECT, PRESERVE, and PROMOTE Nigerian musicianshas decided to react on the ban and on-going feud between the Broadcasting Organisation of Nigeria(BON), Independent Broadcasters’ Association of Nigeria (IBAN) and Copyright Society of Nigeria (COSON) calling for an immediate reversal of the ban in the interest of these artistes whom we know that all the above mentioned organisations have their best interests at heart.
The ban on airplay of these Nigerian artistes and their music on various Nigerian media platforms is from our standpointvery unfair, demeaning and discouraging. Weall knowwithout a doubt that these same artistes who have persevered and assisted us to build, today what is known as the Nigerian music industry, Africa’s biggest entertainment export to the world are the same people that are now being victimised. With this action, the association  foresees a situation where this ban will, rather than encourage well meaning members of the society, with musical talent to hone their craft and join the success story of the entertainment industry, reverse will be the case. We also foresee a situation where the bulk of the material that will be circulated on nigerian airwaves will be foreign materials, celebrating alien artistes instead of embracing, home grown talent and ourcultural heritage.
COSON in it’s own right by a mandate given to the organisation acts as a collecting society for these artistes, helping to monitor and collect royalties entitled to them. As a collecting society, they have since inception acted as a shield to these artistes protecting their intellectual rights. BON & IBAN are arguing that the tariffs and standards presented to them by COSON should be defended and agreeable with them, but we know that the ban is not the best invitation to the negotiating table.
Article 3.13.2.2 of the Broadcast code issued by NBC says: ‘For the purpose of free-to-air broadcast, Nigerian music shall constitute 80 per cent of all music broadcast’. If this ban is sustained, and 80% of the music played on the various media platforms are foreign material, we should ask ourselves as guardians of the music industry, if these media houses are paying the royalties owed to these foreign artistes, and thereby sidelining Nigerian music by Nigerian artistes, are we supporting them or failing them?We should also ask ourselves, ifthis ban which will invariably affect the rising profile of the Nigerian music industry in the world, economically and in relevance is good for us.
With these ongoing conflicts, lets not forget the owners of this intellectual properties, the music owners, record label owners, recording artistes, the instrumentalists, composers, who have spent time and money producing and packaging, what we know, enjoy and call music, their interests should be siginifcant in these agreements.
In light of all that has been mentioned above we ask again that the ban be reversed and that all the affected parties and major stakeholders in the entertainment industry sit down for a dialogue and reach a favourable agreement, beneficial to everyone involved.

The outcome of this stand-off would determine the direction Nigerian music takes. Right now, more than ever, NBC is needed.